Philip’s son Wayne, who is in Benidorm with his brother Lee, is coordinating search efforts from Bourbon’s Bar on Calle Girona.

“Anyone in Benidorm with a spare hour please come to Bourbon’s Bar to help us look for my father,” Wayne told Benidorm Reviews.

“Any help is greatly appreciated at this difficult time.”

It comes as 68-year-old Phil went missing last Monday at 5.30pm from his hotel room at the Edifico Gemelos on Calle Derramador , the far- eastern end of Playa Levante.

The Bridgewater man told his travel partner he went out to ‘buy cigarettes’ before he disappeared and never returned.

Phil has ‘early onset dementia’, according to a missing person person report made to Benidorm Policia Nacional.

Pictures of him have now been widely shared on social media as well as leading UK news sites.

According to Phil’s son Lee, the following is a description of the missing man:

“He’s wearing a stripy polo shirt, dark blue jeans, black shoes and has short grey hair. He speaks in a very broad Somerset accent. He is 5ft6in and of medium build. He has blue eyes and has a very strange right big toe guys like two toe nails.” 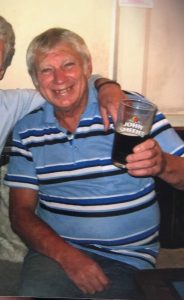 Philip was spotted as recently as Sunday morning (September 15) by a British tourist outside the Pueblo Hotel on Calle Ibiza.

If anyone knows where he is or has seen Phil, please contact: